Error: Twitter did not respond. Please wait a few minutes and refresh this page.

But what if it was tomato sauce?

So the marmite ran out, imagine if next time, or if it had been, tomato sauce, hell it could have been Weetbix! Without some of these key ingredients we wouldn’t have All Blacks, and without All Black’s they’d be no rugby and without rugby they’d probably be no fields and no sheep and no cattle and no dairy and all that stuff and NZ would wind up in the drink! Or well, more in the drink than it already is, what with being an island and all. Which got me to thinking, what else do we take for granted? What else couldn’t we live without?

Just finished watching a weird bit of reality TV about a double decker bus driver from London that goes and drives a bus in the Phillippines for a week instead. They’ve got no marmite over there, definitely no All Blacks and I didn’t spot any tomato sauce. It’s hard to spot WeetBix though, they may have been hiding it in the cracks in the walls of the self made shanty that the 18 people lived in that was about the size of a NZ garage, one of the pokey ones.

They don’t have much, in fact, what would bring their society to a halt was lack of garbage, it was literally the trickle down theory in action. The rich 2/3 of the population throw away all the food scraps and it trickles down to the other 1/3 who re-cook it up and then eat it at the garbage restaurant.

Now I was under some illusion growing up playing rugby and having 8 weetbix for breakfast every morning before my pie with T sauce for lunch, that poor people overseas in countries like the Phillippines or whatever or I don’t know Somalia or Indonesia or anywhere else that really bad garbage piles are considered wholesale distributors of food stuffs for back alley restaurants, and no not in the awesome save the landfill freegan way, these people don’t have parents pantries stocked with Sanitarium products and other All Black sponsored food stuffs…

ANYWAY I was under the impression that yeah they were poor but they didn’t really know anything else and didn’t feel really stink about it. Sorta like how I don’t feel really stink that I don’t have a super yacht or a house I own, but I was well wrong. This guy, this bus driver from Manilla, has worked his ass off driving his crazy makeshift bus 7 days a week for 12 hours a day for endless years, to try and get his kids out of the poverty trap and into education so that they might escape and leave the Phillipines or get one of the few jobs out there for the millions of people. His kids didn’t quite make it, so now he’s still waking up in a room full of his relatives whom he loves cause he’s a top bloke, gettin up in the morning with no weetbix, and sitting on the hard seat of his jeepney bus for the next 12 hours to try and get his grandchildren just enough money so that they can afford, or maybe just one of them can afford, to go to a school which will guarantee them a better life.

So whats it like living in a world without marmite? Or social welfare (the benefit)? Or free education? Or free healthcare? Just go ask that guy, he’s pretty cut up about it actually, breaks down and cries when he talks about how unfair the world is. And he’s right. We get to live in a socialist country, where we help our needy. Granted it’s a more and more neo-liberal socialist country where all those helping things are slowly being stripped away, but currently they’re still there. But just fucking watch out, cause one day when you wake up it might not be your marmite thats not availiable for your toast, you might have lost your whole country along with it. 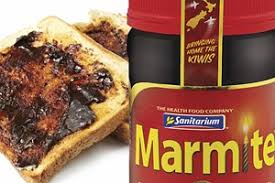